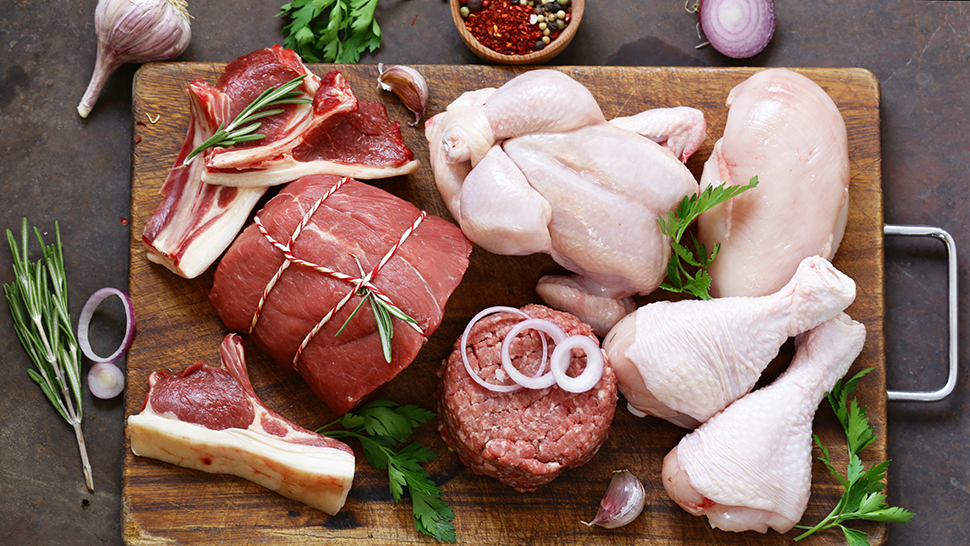 What’s the buzz?
White meat has the same effect on cholesterol as red meat, according to the latest headlines

Just over 100 healthy men and women ages 21 to 65 each followed three diets for four weeks at a time: lean red meat (lean cuts of beef and pork), white meat (lean cuts of turkey and chicken, and plant-based protein (legumes, nuts, seeds, and soy products). No cured or processed meats were part of the diet. Half the participants were assigned to a low saturated-fat group and the other half to a high saturated-fat group. Saturated fat was manipulated by increasing butter and other full-fat dairy products in the meat diets and palm oil and full-fat dairy products in the plant one. All other dietary components were kept consistent across the three diets.

The headlines about the study tended to crow that “White meat is just as bad for you as red meat!” But, before you start seeing red meat in a whole new way, know this: because the study only used lean cuts of red meat, it’s not quite that simple.

This study — and other research — linked saturated fat to increased LDL cholesterol. The study used lean cuts of red meat which doesn’t represent what most meat-eaters actually consume. Most red meat tends to be higher in saturated fat than white meat, so red meat tends to contribute more fat in the diet than poultry does. If you’re choosing between a very lean piece of flank steak and poultry with a similar amount of saturated fat, there may not be much of a difference in how these foods affect your cholesterol, according to this study. But that does not mean that eating short ribs or other higher fat cuts of red meat is the same as eating a piece of turkey with a little skin.

Also, this was a small, short study among healthy people, so it does not tell us much about the long-term effects of diets high in red meat versus white meat.

Moreover, what was missed in the media coverage is the benefit that plant proteins may offer in lowering cholesterol. The study’s results showed that when the participants were eating a diet filled with plant proteins, blood cholesterol was significantly lower than both red and white meat diets even when saturated fat intake remained the same. Legumes, nuts, seeds, and soy products also provide fiber, which has been shown to lower cholesterol. Lastly, plant proteins offer many phytonutrients that have health promoting benefits.

What’s the takeaway?
This study suggests that the color of your meat may not be as important as saturated fat intake when it comes to cholesterol. However, when looking at saturated fat content of red meat vs. white meat as well as the larger body of research on red meat, the recommendation to limit red meat still remains. This study also contributes to a growing body of research that suggests that replacing red or white meat with plant-based protein may lessen the effects of saturated fat from other sources. More research on the difference between red and white meat is needed, so keep an eye out for future studies.