Campus farms and gardens are so much more than just places where food is grown. They’re spaces where life-long friendships are made and communities are built. They’re sites for experiential, real-world learning and hubs for activism. To celebrate the incredible impact of these spaces, we’re introducing a new quarterly series that highlights the work being done on campus farms and gardens at our accounts across the country, starting with the storied Carleton Student Organic Farm at Carleton College in Northfield, Minnesota.

The Carleton Student Organic Farm has existed in one form or another for over a century, starting as a dairy that was eventually converted into a diversified vegetable farm by members of Farm House, a community of students who fittingly live in a college-owned house just steps away from the farm’s rows of vegetables and pollinator-friendly flowers. Throughout the last decade, the farm has flourished thanks to a combination of factors: persistent effort on the part of students, a collaborative relationship with the Bon Appétit at Carleton team, and guidance from the farm’s faculty advisor Professor David Hougen-Eitzman, who owns and operates a nearly 80-acre farm outside of town. The Recipe for a Sustainable and Profitable Campus Farm
Each summer, a new rotation of students, most of whom have never farmed before, take up the reins of the tidy 1.5-acre plot. This year-to-year turnover is managed by Professor Hougen-Eitzman, who assigns the students chapters to read out of small-scale sustainable farming classics like Jean-Martin Fortier’s The Market Gardener and Eliot Coleman’s The New Organic Grower. The novice farmers also benefit from peer education, spending time with previous student workers who provide invaluable guidance. After this introductory crash course, the students operate the farm independently, making day-to-day decisions and learning the many skills that farming requires, each becoming an amateur biologist, meteorologist, soil scientist, and small business entrepreneur for the summer.
The students work closely with the Bon Appétit at Carleton team throughout the season, sending a steady stream of freshly harvested produce to the kitchens. The relationship has proved to be mutually beneficial, with the farm getting a competitive market rate for the produce they grow and the Bon Appétit team receiving hyperlocal ingredients which are creatively integrated into menus. “We believe strongly in the learning mission of the farm and purchase everything the students want to grow for us, said General Manager Katie McKenna, this is an educational experience we’re proud to be a part of.” This arrangement allows the farm to be profitable, giving it enough money to be completely self-sustaining – a rarity amongst college farms – with cash flow covering maintenance, special projects undertaken by students, and even the occasional infrastructure upgrade.

Students Return After a Fallow Year 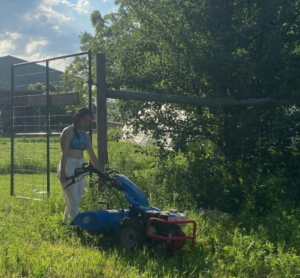 Student Eunice Gao uses a walk-behind tractor at the farm

Due to the COVID-19 pandemic, the farm was left fallow during the 2020 season, an interruption in what had been an unbroken chain of plantings and harvests in recent years. But this summer, a new rotation of students returned to the farm, full of enthusiasm but without as much of the peer support other farm crews typically receive. Undeterred, Simran Kadam, Eunice Gao and Soren Eversoll wake early each morning to work before the Midwestern summer heat becomes intolerable. After a midday siesta it’s back to work again until evening. In true farm fashion, the students departed from the norm of growing food solely for Bon Appétit and met with representatives from Northfield’s Community Action Center (CAC), a hunger-fighting organization in the community, to identify culturally appropriate crops suitable for the population CAC serves. Now, in addition to selling the usual suspects of winter squash, greens, and root vegetables to Bon Appétit, Simran, Eunice, and Soren will deliver heirloom peppers, melons, root vegetables and carrots to CAC.

Despite only being a month into their first season, the crew is already planning projects and growing specialty produce. Eunice brought Chinese string bean seeds to Carleton, given to her by her family, not knowing if she would have a place to plant them. They now happily occupy a row at the farm alongside other crops, providing a taste of home throughout the summer. Soren planted the infamous Carolina Reaper – a pepper considered to be the hottest in the world – and hopes to hold a hot pepper eating contest before the summer ends. Together, they’re thinking about installing a beehive at the farm, and possibly a compost bin too, adding more elements to a place that will continue to be enjoyed, improved, and celebrated by Carleton students for years to come.